The goal of my laboratory is to understand the basic mechanisms behind tumor cell growth and proliferation.  Cellular growth involves the production of ribosomes and translation of existing mRNAs into proteins.  Numerous projects in the lab are aimed at understanding these basic processes and how they might impact tumor growth and progression. I have a broad background in molecular and cellular biology with an emphasis on tumor cell biology. I have recently expanded my research to understand the processes of cell growth signaling, ribosome biogenesis and mRNA translation in breast cancer. We have begun to identify interaction networks with these pathways using genetic, biochemical, and proteomic approaches.  As PI on numerous grants, my lab laid the foundation for how major tumor suppressors prevent tumor formation by targeting cellular growth pathways. We have been a leader in the field of ARF tumor suppressor biology since its discovery and continue to seek information on how ARF functions in collaboration with p53. 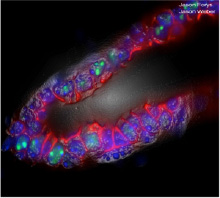 Triple negative breast cancer (TNBC) has become a frequently used descriptor for those cancers that are estrogen receptor, progesterone receptor and HER2 negative.  This breast cancer subtype remains a challenge to clinicians, laboratory investigators, and patients due to its disproportionate number of breast cancer deaths and its lack of an established therapeutic target.  TNBC is an aggressive disease where overall survival, regardless of stage, is poor when compared to other subtypes.  While TNBC certainly shows significant overlap with basal-type and BRCA1-related breast cancers, this overlap is not complete.  Moreover, we can now appreciate that the TNBC subtype can be further divided into subgroups based on expression signatures, resulting in distinct subgroups with putative molecular targets. The identification of new subgroups within TNBC, based on novel biomarkers or unique biology, will thus be critical in our ability to identify proper molecular therapeutic targets for these patients. 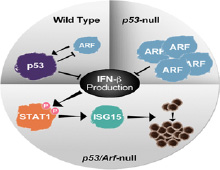 We have recently observed deletion or repression of the CDKN2A (Arf) tumor suppressor locus in nearly all of the mutant p53 TNBCs we have analyzed, suggesting that these two tumor suppressors might act in concert to prevent aggressive TNBC.  Consistent with this finding, mouse fibroblasts, mouse mammary epithelial cells (MMECs), and human mammary epithelial cells (HMECs) lacking both Arf and p53 exhibit tremendous gains in growth and proliferation.  Notably, we have shown that these cells secrete more interferon- (IFN-) that in turn activates a canonical JAK1/STAT1-signaling cascade.  Importantly, we have also observed this connection in human TNBC.  Our data shows that increases in interferon signaling and subsequent downstream ISG15 expression are required to maintain the aggressive tumor characteristics of Arf/p53-null MMECs, leading us to believe that this might constitute a novel and druggable oncogenic pathway in TNBC. The ultimate goal of this work is to elucidate the mechanism by which the IFN- pathway acts to transform cells lacking ARF and p53 tumor suppressors.  Therefore, components of IFN- signaling cascade will be potential targets for cancer treatment or diagnosis.

Drosha is an RNAse III endonuclease capable of cutting double-stranded RNAs. It is part of the microprocessor, a multi-protein complex involved in the first step of microRNA (miRNA) processing. In addition to its role in miRNA processing, Drosha also participates in the processing of ribosomal RNA (rRNA) and the destabilization of mRNAs. The ability of Drosha to regulate multiple RNA species within the cell makes it an important mediator of cellular homeostasis. Both genomic amplification and post-transcriptional overexpression of Drosha expression has been reported in multiple cancers, including breast cancer. Drosha expression has been shown to have prognostic value in some cancers while showing a strong correlation with disease progression in others. However, the mechanisms involved in the regulation of Drosha expression and how alterations in Drosha expression contribute toward tumorigenesis are not known.  Recently, our lab identified a novel pathway involved in regulation of Drosha expression—the ARF tumor suppressor pathway. Under normal cellular conditions, oncogenic stimuli activate the ARF tumor 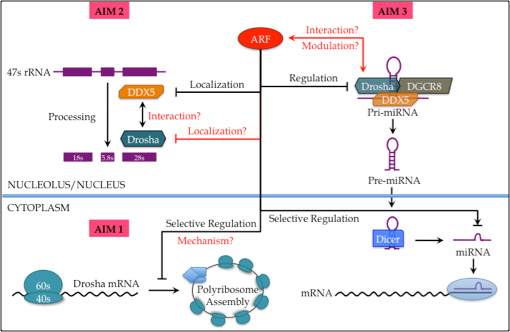 suppressor pathway, which is a potent inhibitor of ribosome biogenesis. We found that loss of ARF induces Drosha protein expression by increasing Drosha mRNA translation in a selective manner. Furthermore, ARF loss also increased nucleolar localization and ribosome biogenesis functions of the Drosha binding partner, DDX5. ARF loss also stimulated a selective miRNA signature, suggesting a new role for ARF in miRNA processing pathway. The long-term goal of this work is to understand how alterations in Drosha expression contribute to tumorigenesis. Since ARF loss is a frequent occurrence in breast cancer, identifying the mechanism underlying ARF-mediated regulation
of Drosha has functional relevance for understanding
breast cancer biology.

Mammalian cells maintain tight control over mRNA translation through regulated ribosome production and selective loading of ribosome onto existing mRNAs.  Deregulation of protein translation is frequently found in human diseases and it has been regarded as one of the contribution factors to cancer development.  As such, both aberrant ribosome production and mRNA translation are at the heart of tumorigenesis.  Understanding how these processes are regulated and coopted by cancer cells has only recently begun to be appreciated.  RNA helicases are intimately involved in the production or maturation of ribosomal RNA (rRNA), messenger RNA (mRNA), and microRNA (miRNA).  The ability of RNA helicases to regulate the 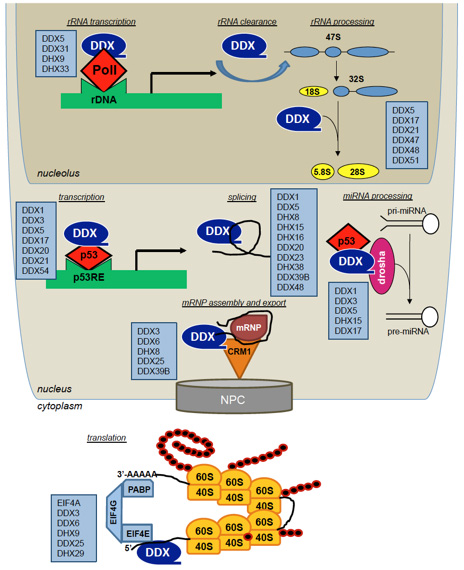 steady-state levels of these diverse RNAs underscores their physiological importance.  Many of these RNA helicases also have roles in disease.  In particular, the DEAD-box family of RNA helicases is becoming an interesting focus of cancer research, given their frequently observed overexpression and potentially diverse functions in RNA metabolism.  Reconciling the well-characterized biochemical activities of the DEAD-box proteins with the emerging descriptions of their behavior in cells suggests that the role of this family may need to be expanded to include many recently characterized non-canonical functions.  With regards to cancer, RNA helicases have been ascribed both tumor suppressive and oncogenic roles.  Additionally, many DEAD-box proteins may fit the role of a non-oncogene; cancer cells may become addicted to cellular processes in which the participation of these RNA helicases is rate limiting.  We have shown that several DEAD-box helicase, DHX9, DHX33, DDX1, DDX5, and DDX21 are important in promoting RasV12-dependent cellular transformation.  The long-term goal of this work is to determine the mechanism of DEAD-box helicase growth promotion in mouse and human cells and identify potential chemical inhibitors of their collective activities.